One of W&W Antiques Norwegian acanthus carved tine boxes was featured in the latest edition 181/June of the GMC Wood Carving magazine (The Guild of Master Craftsman publication).

This Norwegian wood carving article is by one of their wood carving contributors Iain Whittington, retired Army Engineer. It outlines the history of Norwegian wood carving and highlights a new version of the book ‘A Norwegian Woodcarving textbook’ by Odd Fauske with an updated introduction from Iain and Evaline Whittington. Archival material from his work has been brought back to life and enhanced with a new English translation in this compendium of his work. 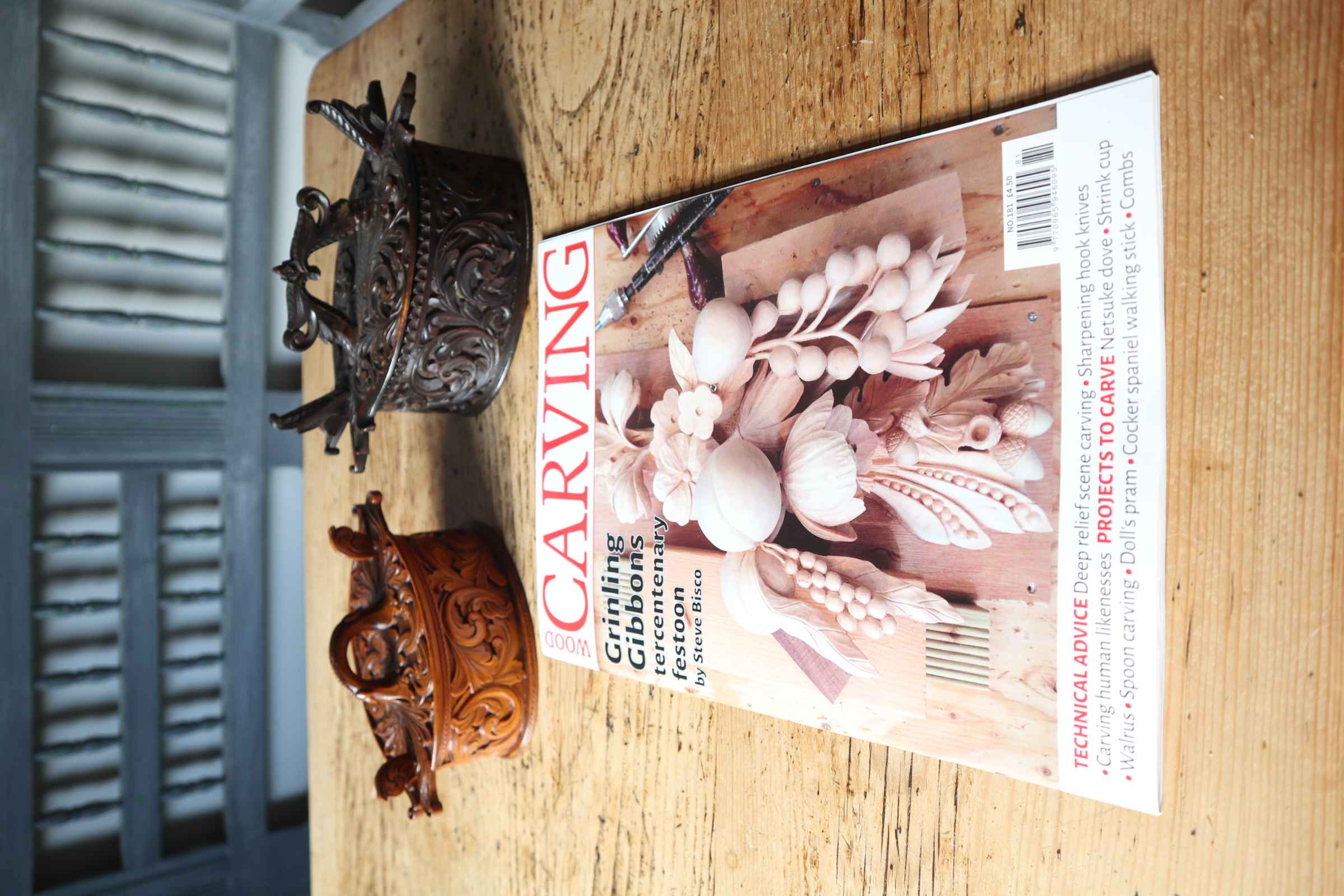 The book is available for sale on Amazon and all proceeds are in support of SSAFA “The armed forces charity”.

Acanthus remains a popular form of low relief woodcarving with a long history in Europe, especially in Norway, where the style also appears in their folk-art. It also has a strong following in North America, having been assimilated from the “Norsk-Amerikan” community into main-stream woodcarving. It is the predominant influence in the Norwegian style of woodcarving with many regional interpretations and variations. The late Odd Fauske was an expert proponent of the style, reflected in the output of traditional wooden furniture and fittings from his workshop in central Norway.

Our W&W Antiques tine boxes for sale Ref Code: 10297 / 10271 are exquisitely carved acanthus leaf Norwegian tine boxes in the baroque style from the end of the 19th / start of 20th Century (c.1886-1920). The tine boxes are from the Gudbrandsdalen valley district of Norway, the home of acanthus carving*.

Relief acanthus tendril carving on a tooled background covers the entire exterior.  The time alone to carve Norwegian tine boxes of this nature and of this quality must have been a considerable investment for a highly skilled craftsperson.

**The thistle-like acanthus plant grows naturally in the Mediterranean. First appearing as architectural ornamentation in ancient Greece and during the Roman period. The acanthus motif resurfaced during the Baroque period (1650-1650). The Baroque-style acanthus leaf motif became established on the coast of Norway around 1700.  It soon moved inland to farming regions where woodcarvers, as well as painters, fell in love with the acanthus leaf.  Much of the carving on smaller objects was done on a hobby basis.  Small tine boxes like these were designed for storage of valued trinkets and as keepsakes, often bought or commissioned as gifts.

In Gudbrandsdal and surrounding regions, acanthus style ornamentation was especially popular. ***It is called both krullskurd and Dølaskurd "scroll carving". 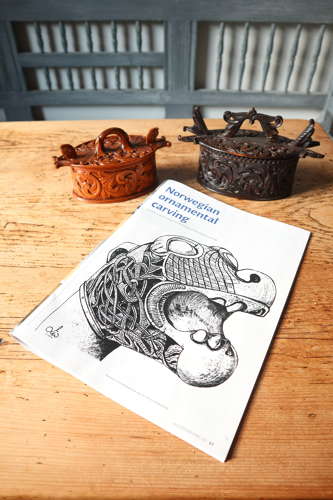 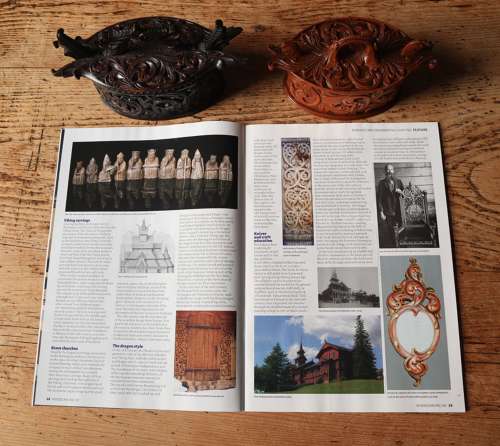 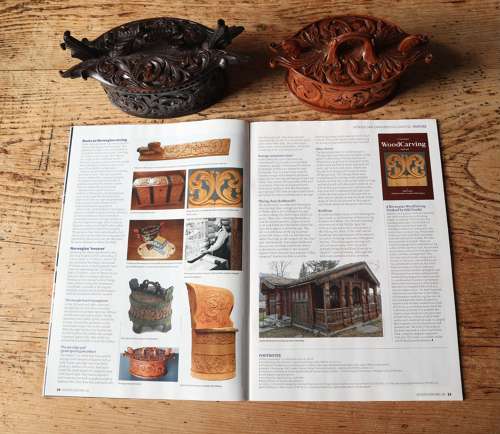 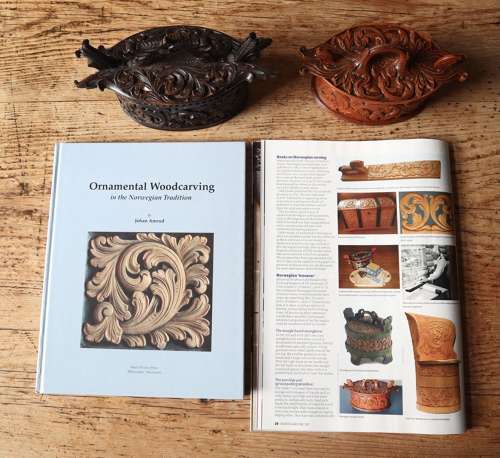 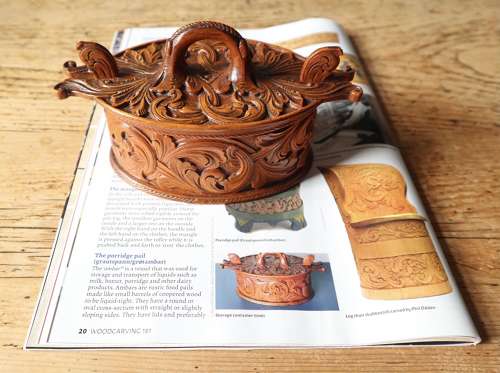 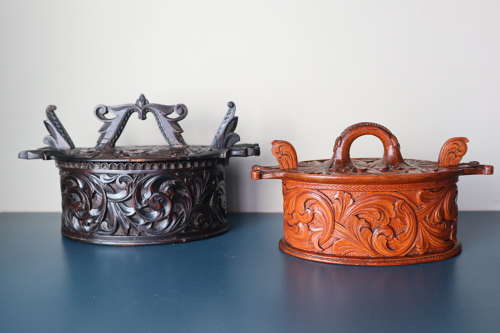 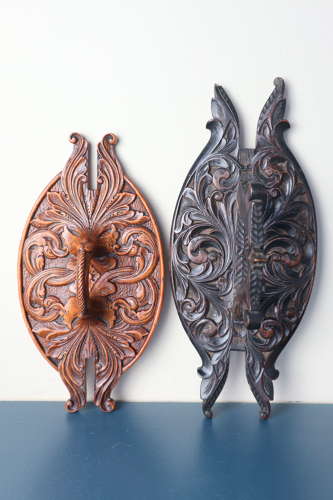