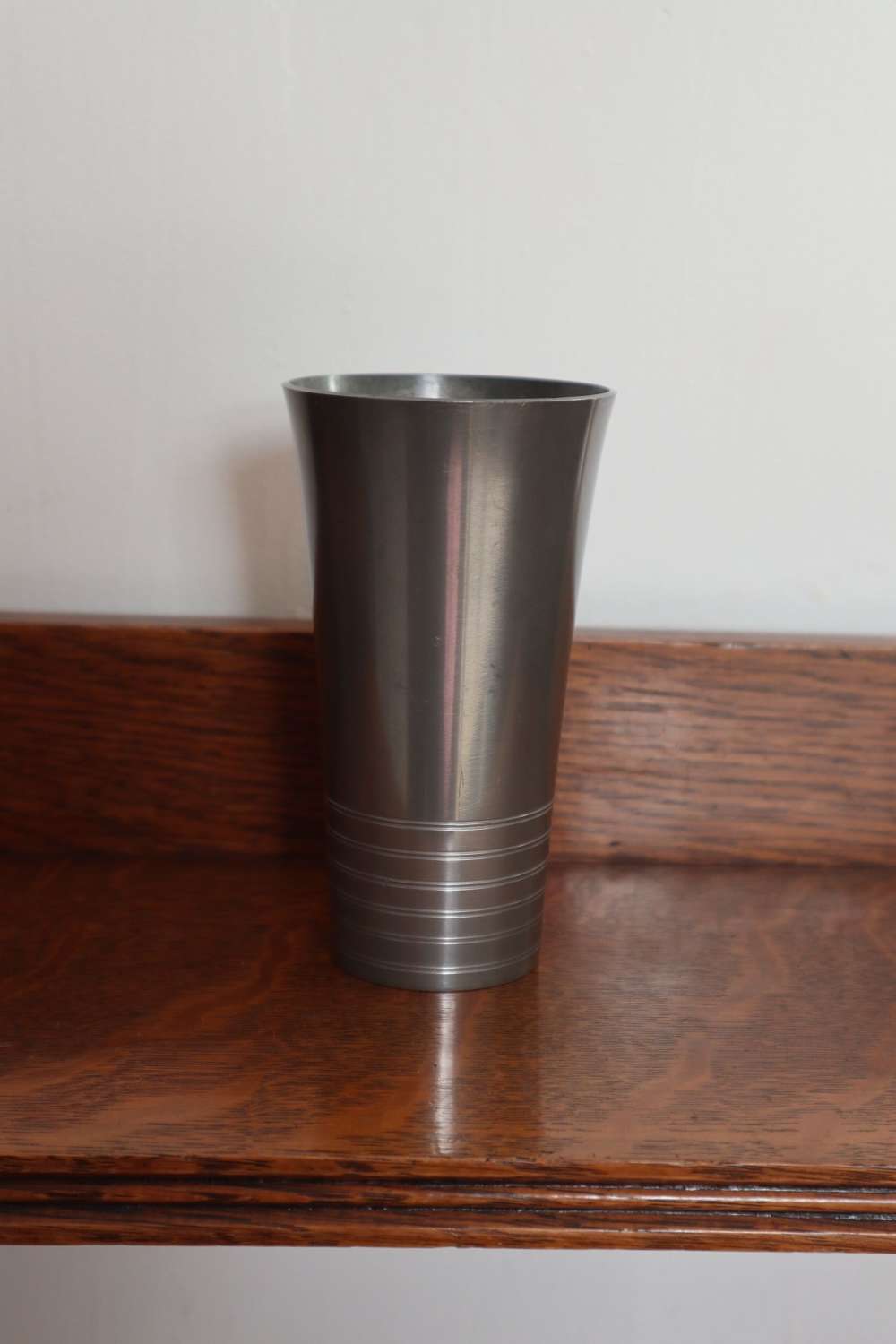 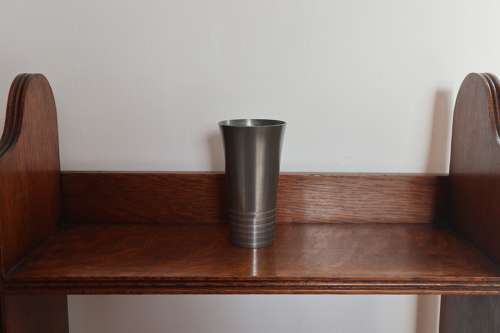 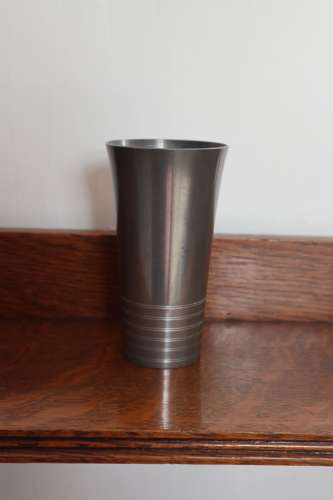 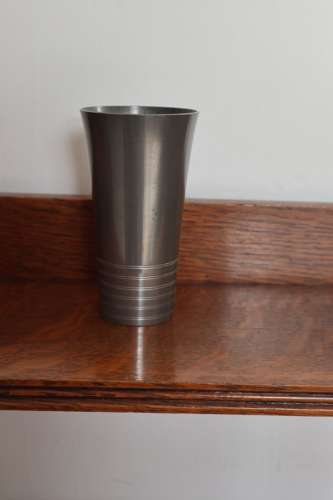 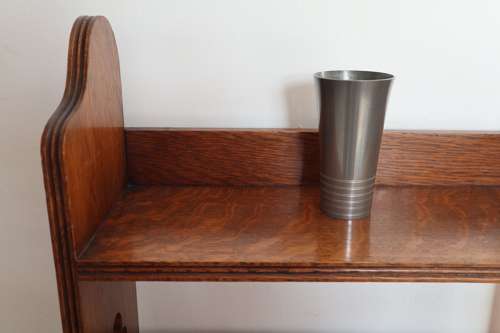 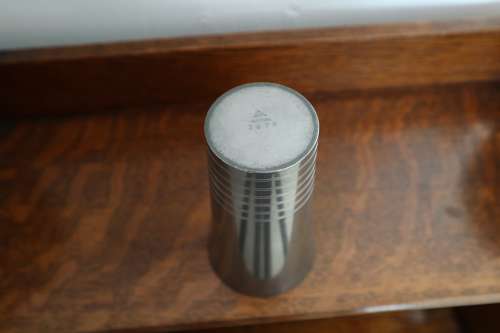 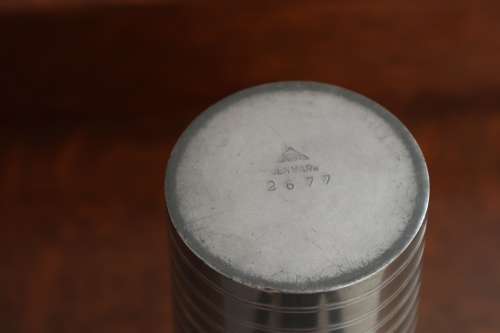 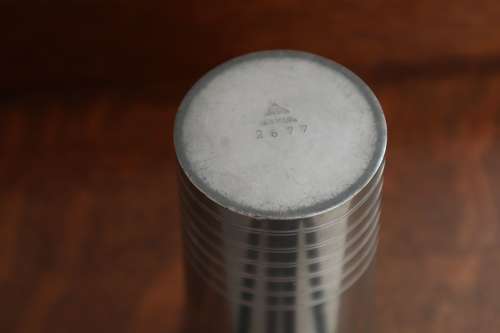 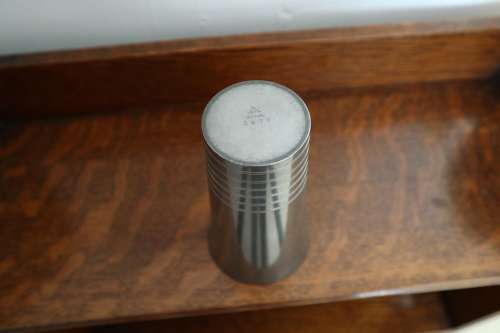 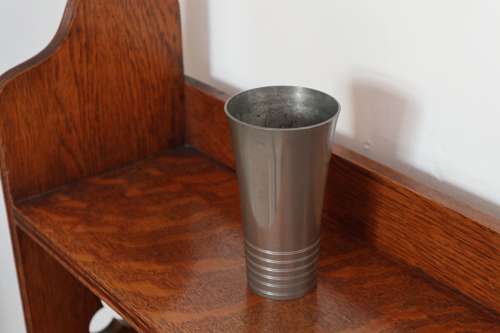 - This Danish vase has a Just Anderson stamp and number on the base of 2677.
- This design is a trumpet shape with six sets of double line engraving encircling around the lower third of the vase.
- According to the information on Just Anderson, this particular vase is made of tin; Just Anderson made metalware from pewter, copper, bronze, tin, and Disko (an alloy of lead and antimony, named after Disko Bay in Greenland).

Just Andersen was a Danish decorative sculptor and silversmith. He is best known for his candleholders, vases, and figurines using pewter, brass, copper, tin, and Disko. Born on July 13, 1884, in Godhavn, Greenland, Andersen studied at the Royal Academy of Art in Copenhagen before attending the School of Danish Crafts under Jens Møller-Jensen in 1912.

In 1915 he married Alba Mathilde Happiness, who was a chaser for Mogens Ballin. In his early career he designed for Georg Jensen, A. Michelsen, and P. Hertz. Inspired by the silversmiths the couple worked for, he opened Just Andersen Pewter in 1918 his own silversmith company. He is best known for his neoclassic Scandinavian design of articles for everyday use. Just Andersen had his own showrooms in Berlin, London, New York and Los Angeles. In 1934 he designed Blok flatware for Jensen. In 1935, his marriage to Alba was dissolved and in 1938 he remarried, this time to an interior decorator named Esther Nielsine Jakobine Petersen.

In addition to his work in metal, there is also a large collection of pottery and ceramic sculpture which he produced over the years up to his death on December 11th, 1943. His works are in the collections of the Metropolitan Museum of Art in New York and the National Museum in Stockholm, among others.

Free delivery in the UK as priced. International buyers are welcome, but please contact us prior to payment to confirm the additional packaging, insurance, and shipping costs by way of acceptance to your country.