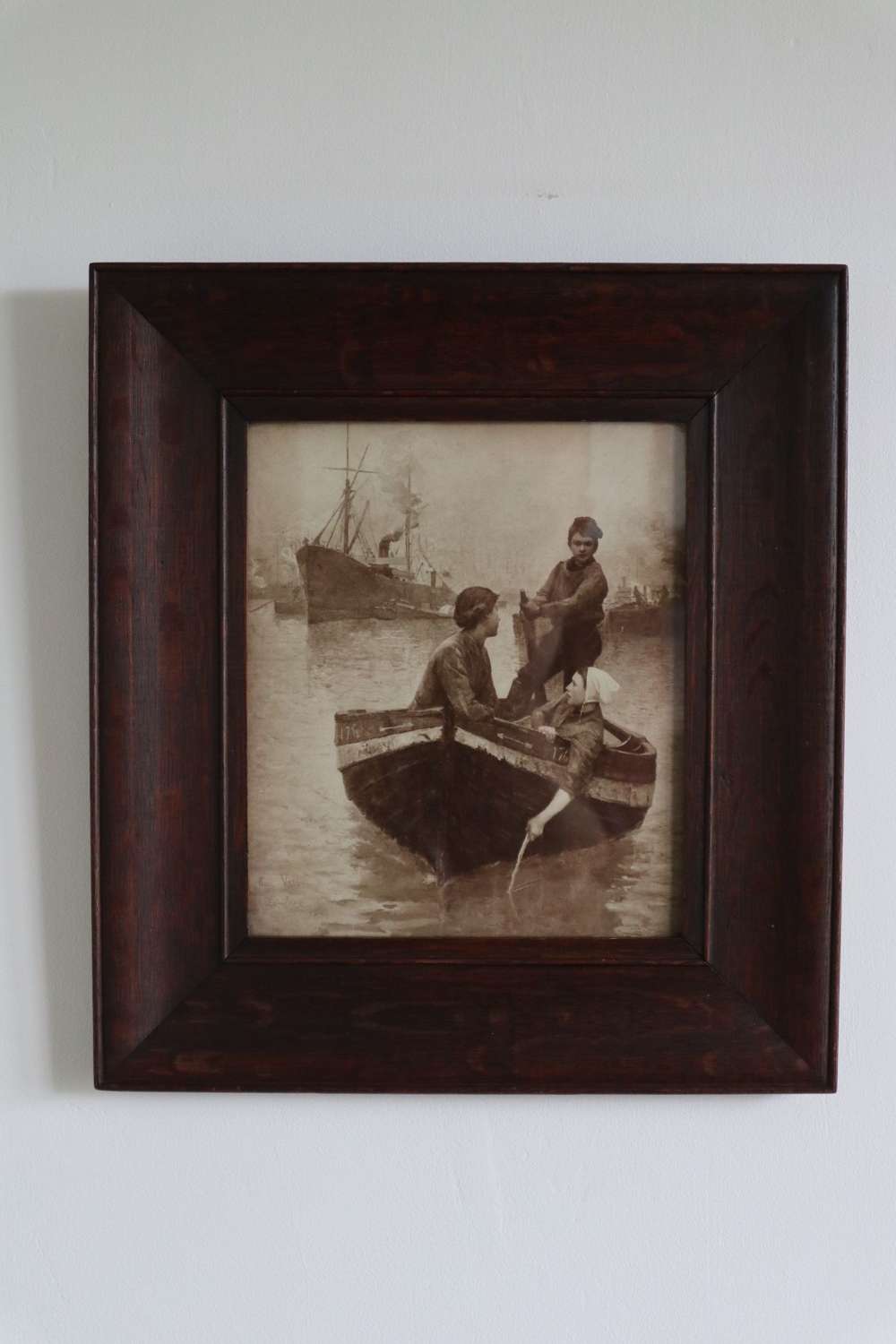 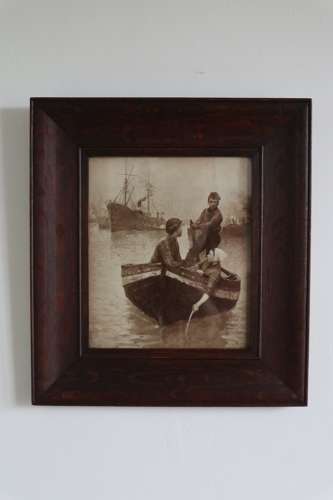 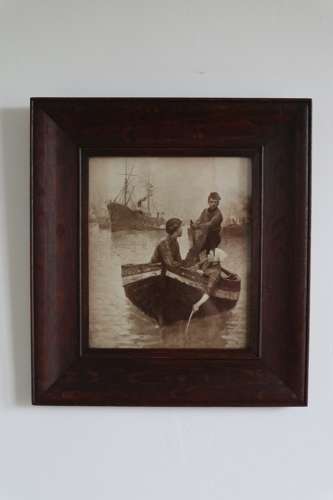 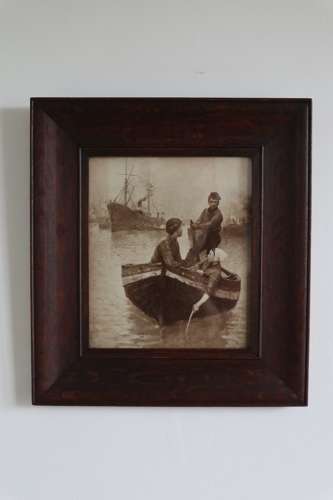 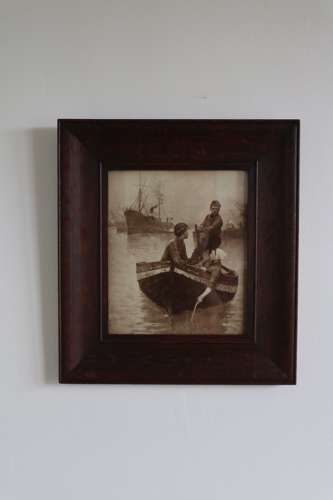 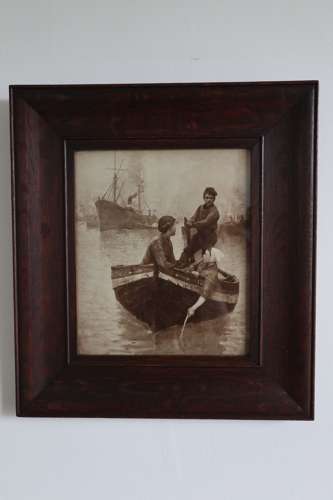 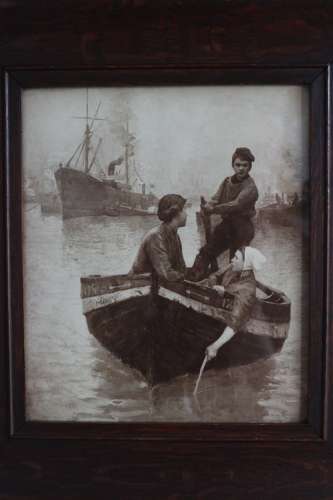 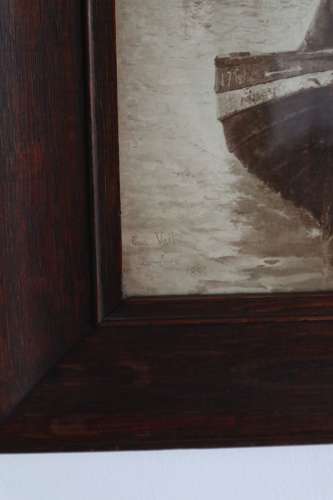 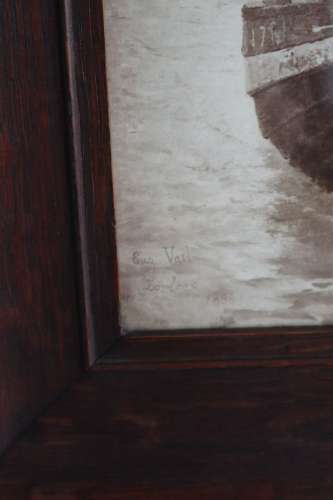 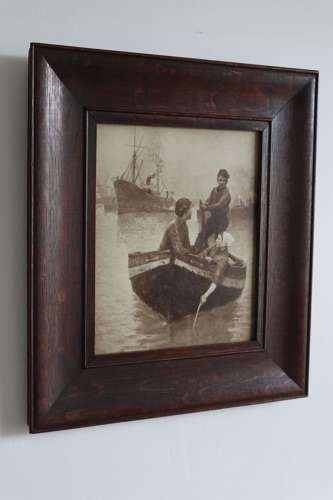 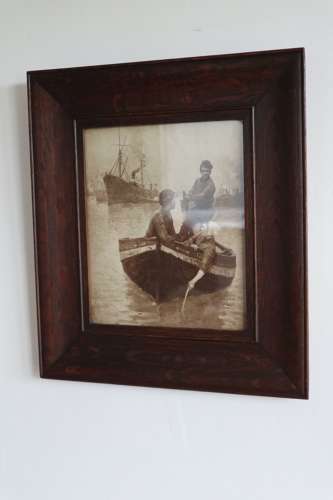 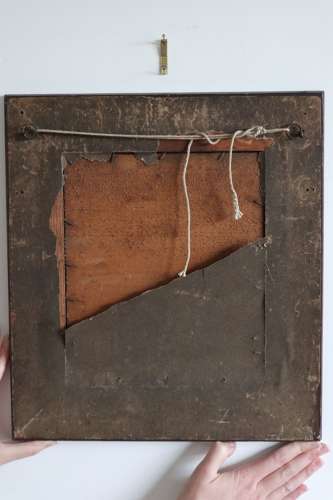 This original print of a painting by Eugene Vail (1857-1934) is framed in a wide dark oak setting evocative of the arts & crafts design.

This attractive period print clearly shows the copy of the signature in the lower left (Eug Vail, Londres, 1886) and the frame and backing appear to be original as shown.

This print shows a portrait scene on theThames at London of two young women with a boy at the helm of a small wooden dinghy, in front of large steamships and other river traffic.

The original painting is a large oil on canvas, which was internationally exhibited to much acclaim and it is thought that reproduction prints in the era would have been commercially available.

Son of a French mother and an American father, Eugene Vail maintained strong ties with both France and the United States throughout his life.

As a young man, he studied in Paris and New York. Although he showed an early aptitude and enthusiasm for art, his father insisted on a practical education; before he was twenty Vail graduated from Stevens Institute of Technology in Hoboken, New Jersey, with a concentration in mechanical engineering. After college he joined the National Guard, participating in a western expedition led by Captain George Wheeler. Vail sketched the terrain and painted portraits of his traveling companions and the Native Americans they met.

At the end of his service, the young artist studied first with William Merritt Chase and J. Carroll Beckwith (1852-1917) at the Art Students League in New York, then in Paris. The first of his canvases to be included in the Paris Salon had as its subject a Breton peasant girl. Vail went on to paint images of peasants and fishermen in villages and towns throughout Europe. His seafaring subject, Ready About (location unknown) won him a gold medal at the Exposition Universelle in 1889.

Vail's realistic, anecdotal works were exhibited in Europe and the United States. He won medals at Berlin, Munich, Antwerp, Liège, and St. Louis, and his paintings were purchased by several institutions. In 1894 he was made a Chevalier of the Légion d'Honneur. After many successful years of producing work in the academic, 'Salon' tradition, Vail gradually adopted a looser and more impressionistic style. His palette, too, became lighter, perhaps in response to the light and color of Italy, particularly of Venice, where he began to spend his autumns. He became known for his lighthearted scenes of people engaged in winter sports.

Free delivery in the UK as priced. International buyers are welcome, but please contact us prior to payment to confirm the additional packaging, insurance and shipping costs by way of acceptance to your country.