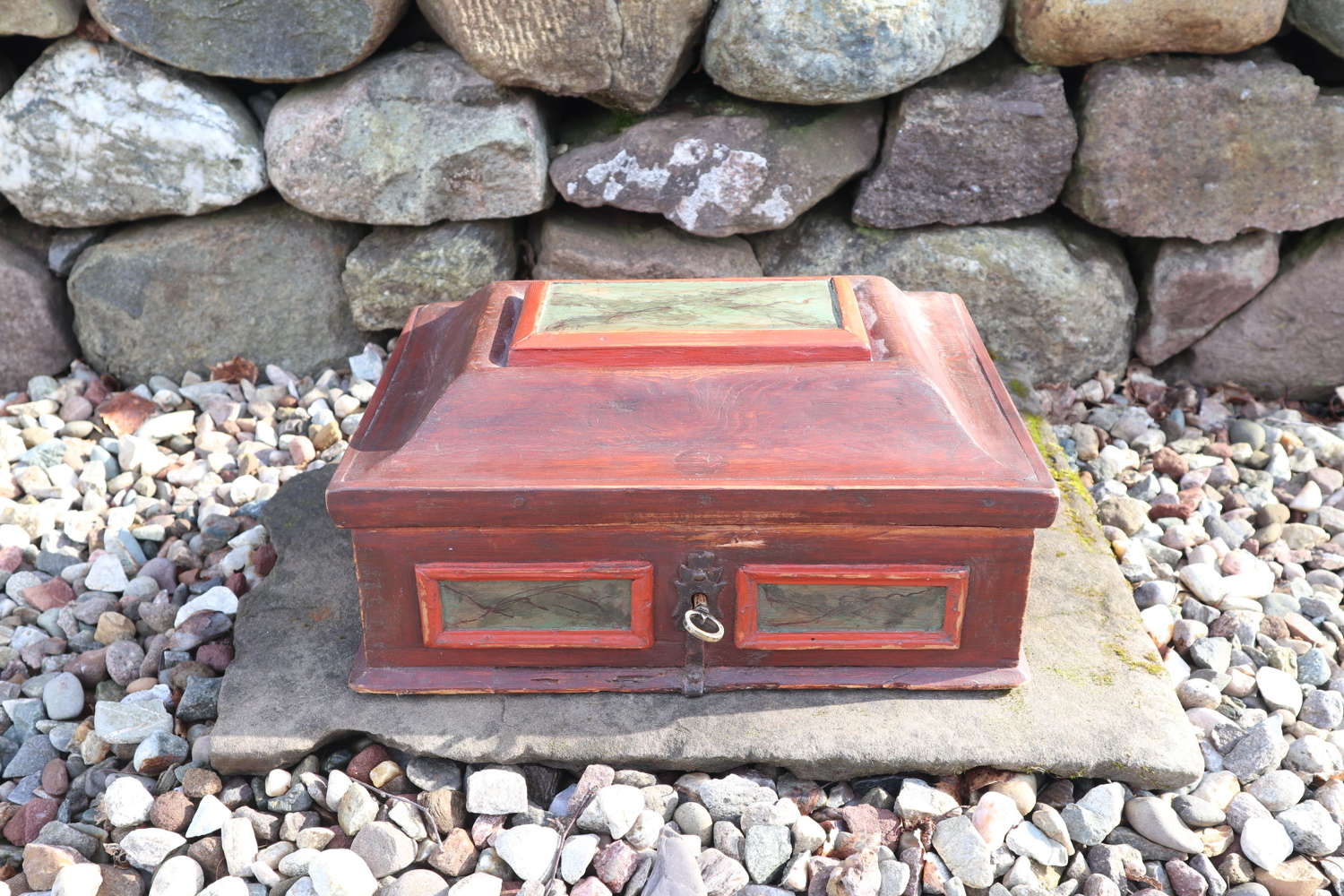 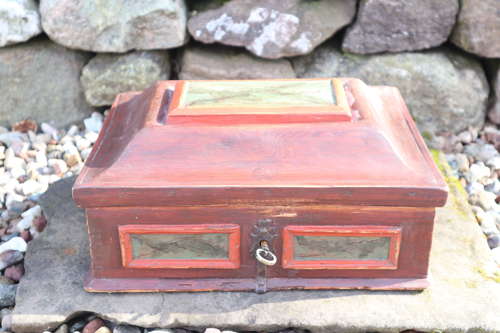 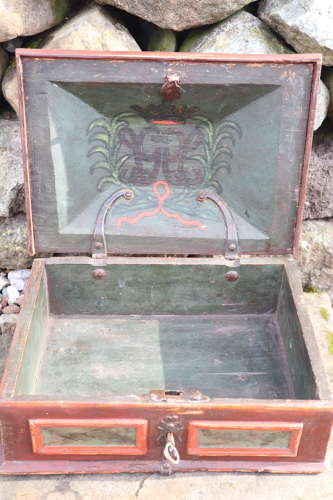 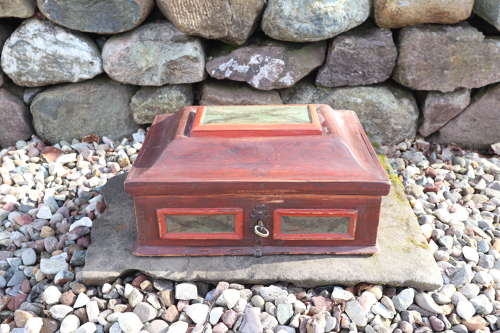 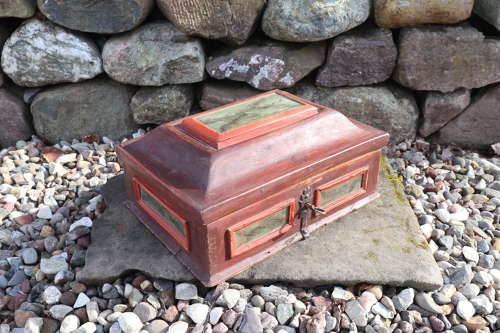 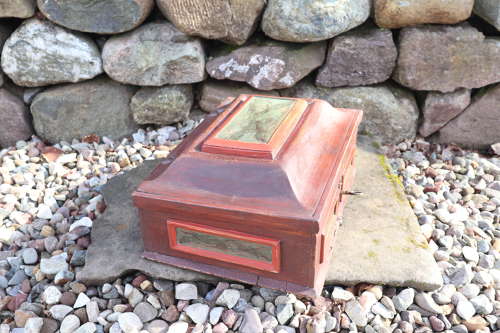 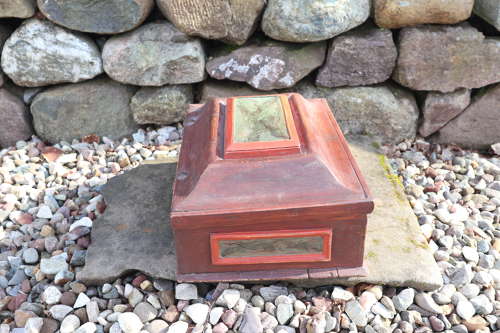 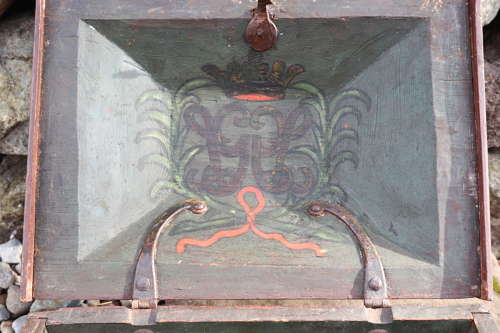 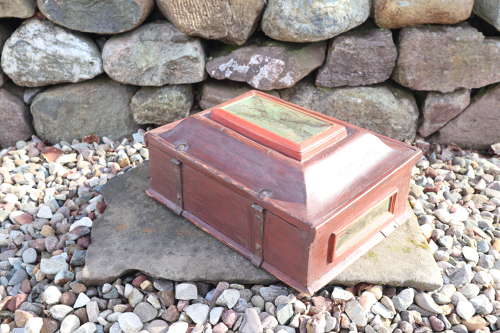 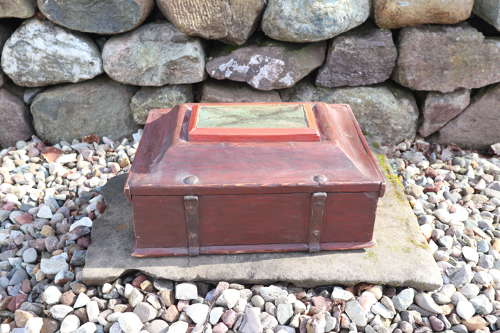 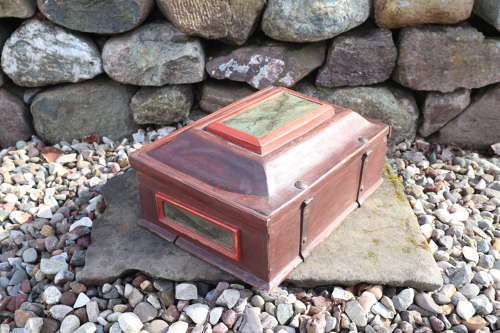 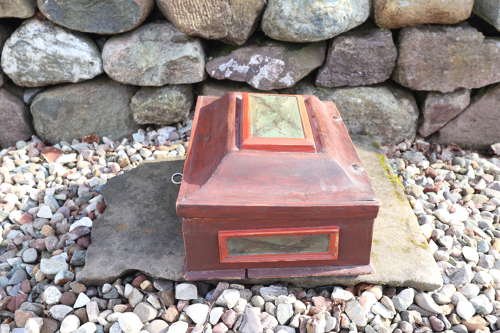 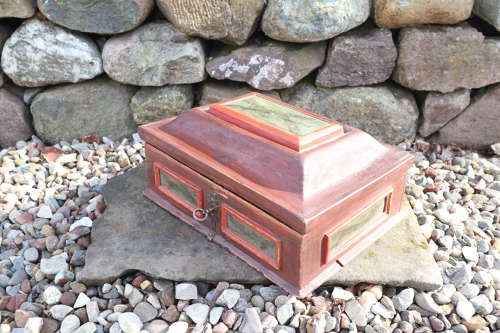 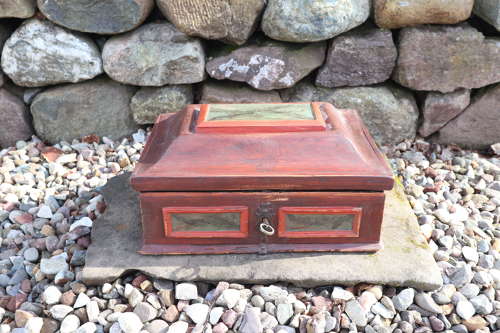 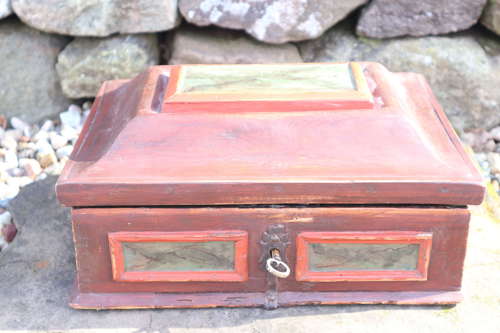 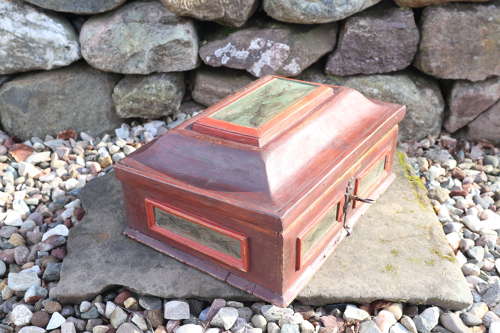 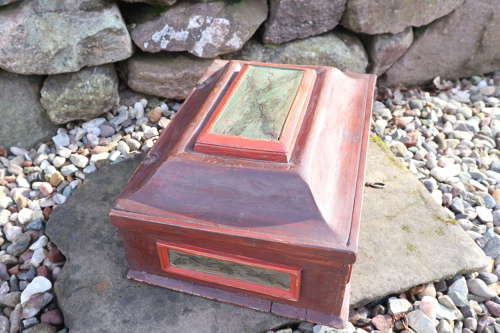 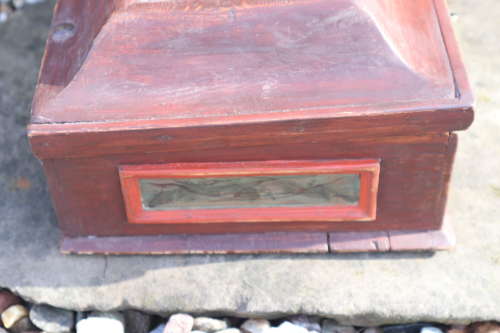 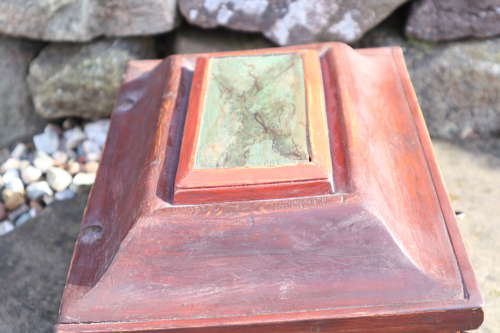 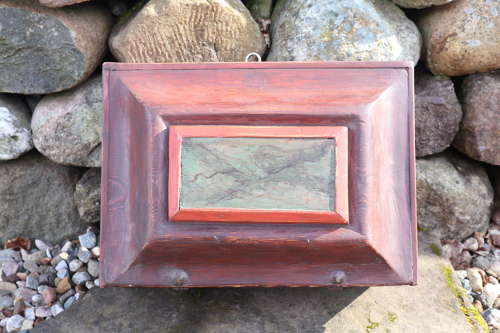 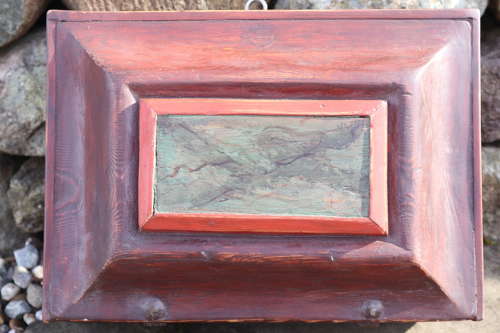 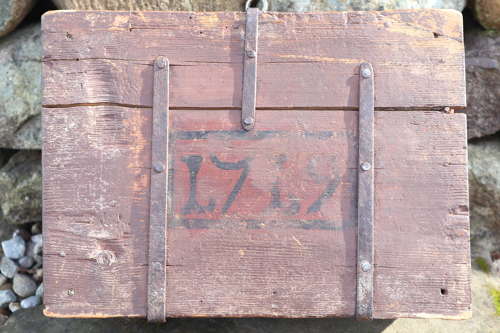 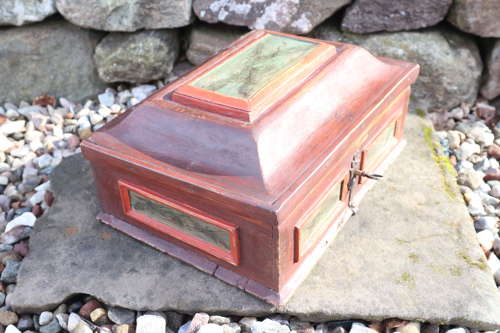 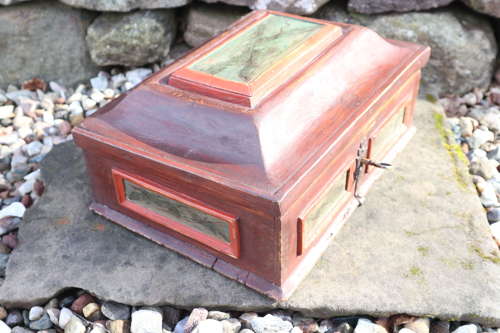 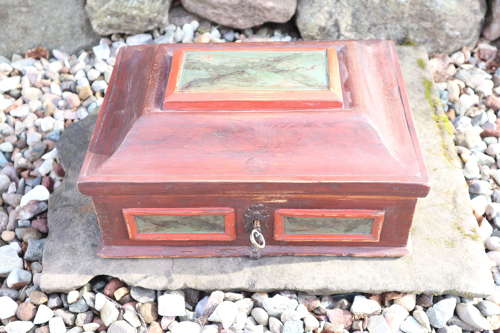 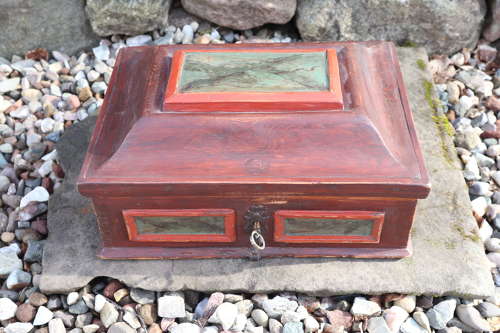 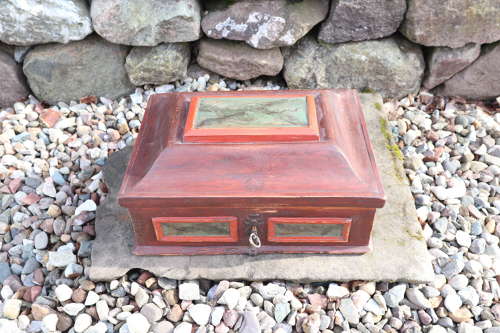 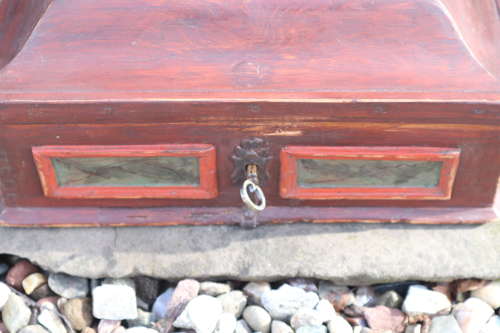 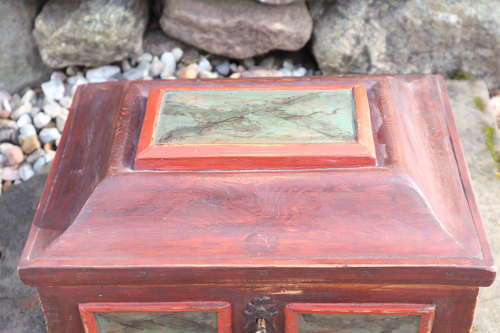 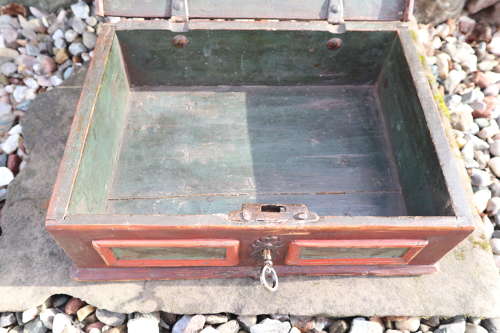 For sale is an absolutely beautiful 300 year old Swedish Baroque period painted bridal/dowry table casket from the first quarter of the 18th Century.

- The casket is constructed from painted pine, with a distinctive and rare Baroque curved, raised and enhanced sloping lid shape, the background colour of the box in a warm orange/red and is intended to imitate more expensive woods.
- The panels are then also decorated with bevelled red raised sections framing a blue faux marble painted section to the lid, front and sides to imitate marble.
- The box from the early 18th Century shows a very distinctive Swedish Baroque shape and features a style with raised or fielded panels sometimes referred to as mirrors.  These are in bevelled relief to three sides and the lid.
- The table box is from Northern Sweden likely from the Ångermanland Region in Northern Sweden, bordering Lapland.  This region is recognised as historically producing a special landscape of folk carpentry, with great skills and a great understanding of the possibilities for pine and its superior properties as a slow growth material in this climate.  Similar Baroque decoration to writing slopes are recorded at the Västernorrland's museum in Sweden and are referenced, catalogued and detailed on the website for museum at http://old.murberget.se/upptack/foremalslista.aspx.
- The Baroque style is a highly ornate and elaborate style of architecture, art and design that flourished in Europe in the 17th and first half of the 18th century. Originating in Italy, its influence quickly spread across Europe and it became the first visual style to have a significant worldwide impact. The first global style, Baroque's influence extended from Italy and France to the rest of Europe.  As a style, Baroque also changed as it crossed the world, being adapted to new needs and local tastes, materials, wealth and contexts as was the case in Scandinavia and Sweden influencing 'folk art' objects in rural communities.
- The inside of the lid is decorated with superb curved wrought iron decorative hinges and a decorative flowing monogram between two wreath branches / stylised acanthus tied with an orange red knot beneath.
- This decoration sits below a stylised crown with a 4-letter monogram of intertwined letters probably as a bridal casket signifying the connection and occasion of a marriage between two individuals and their sets of initials attributed as J.G.-P.L.
- The casket box has original wrought iron hinges and lock escutcheon.  The pressure lock operates and may be original but the key is definitely not and the lock has seen some repairs previously as the lid due to its elaborate shape has an upward curve towards the front as the pine has dried out.  The key is removable and operates to open and close the lid but the pressure release lock at nearly 300 years old is not a smooth action.
- The casket has age-related wear as shown in the images to the edges and paint, but at c.300 years of age it is in solid condition and has had minimal worm for its age and is a testament to its solid pine construction and design.