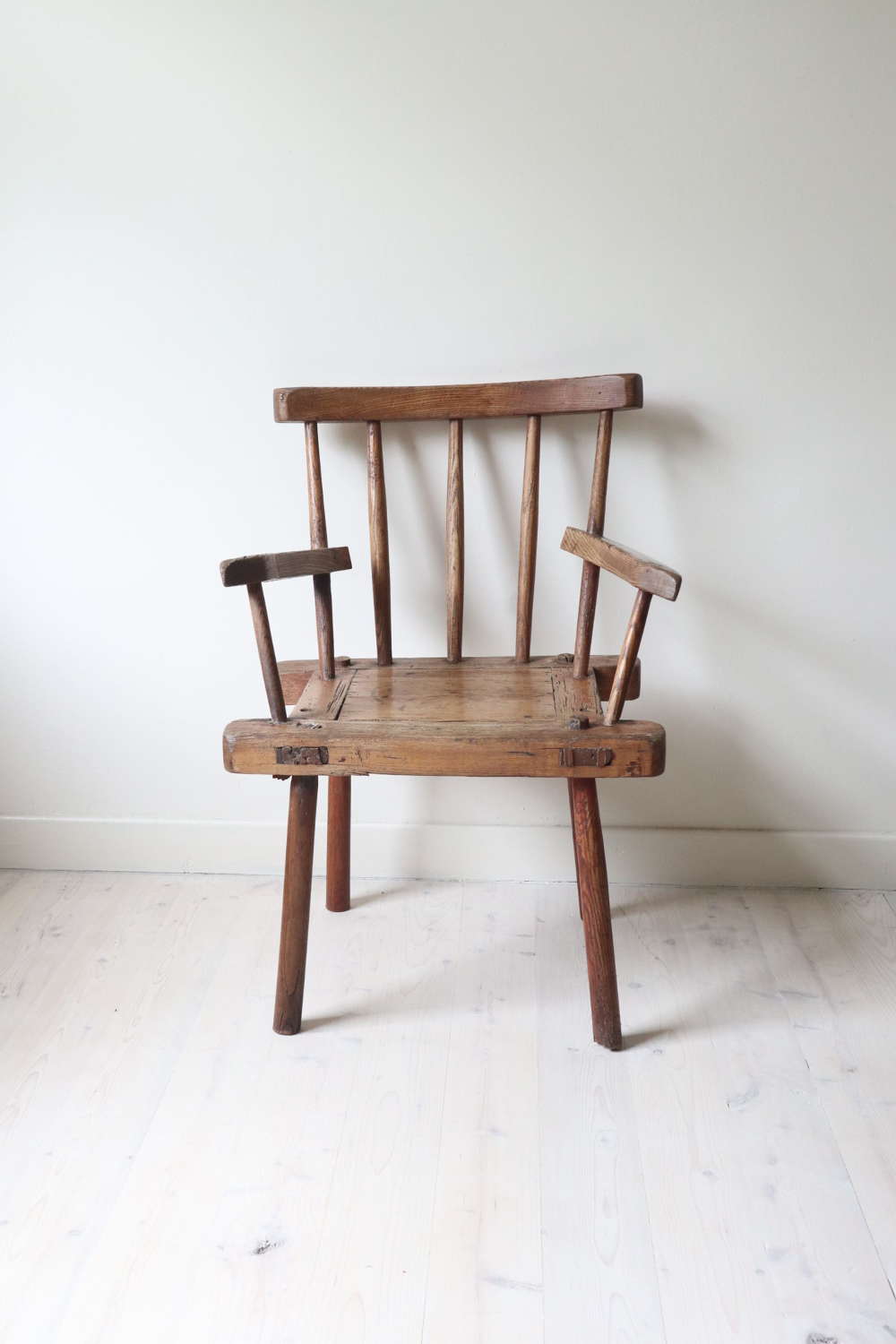 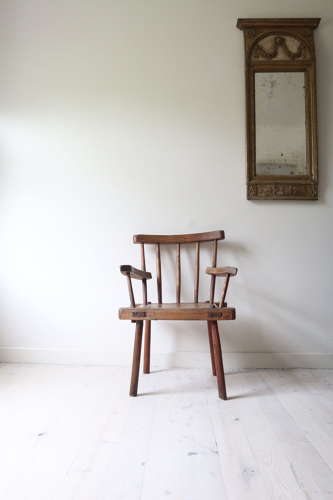 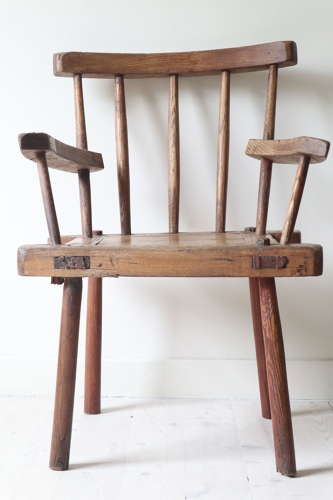 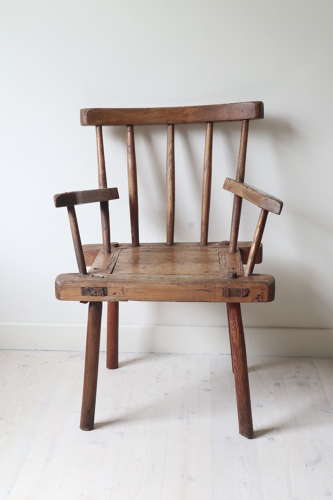 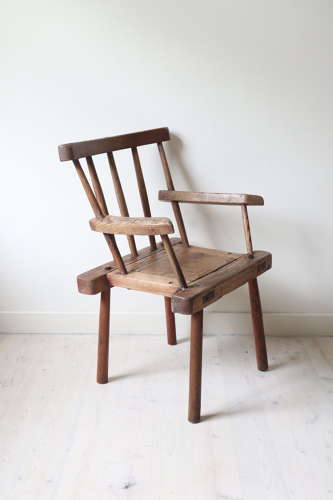 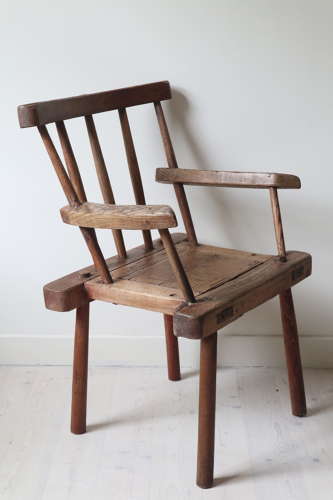 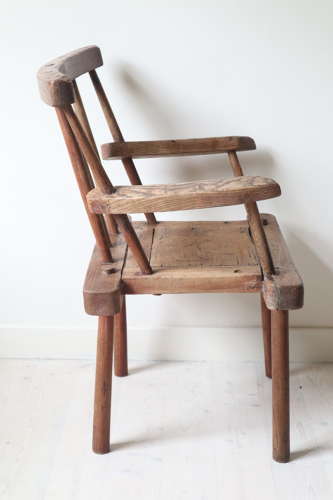 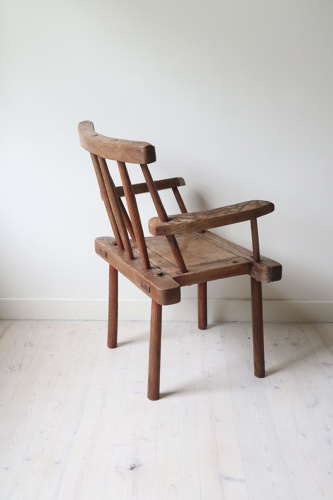 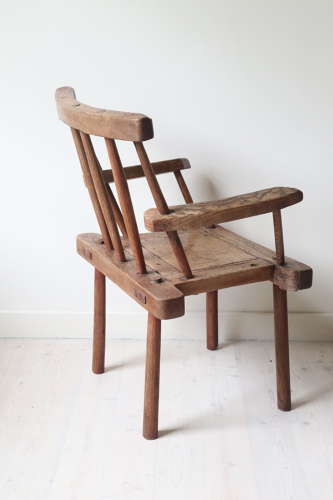 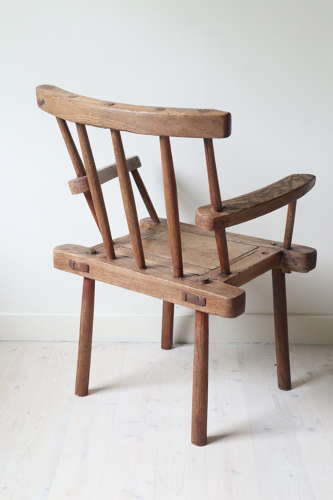 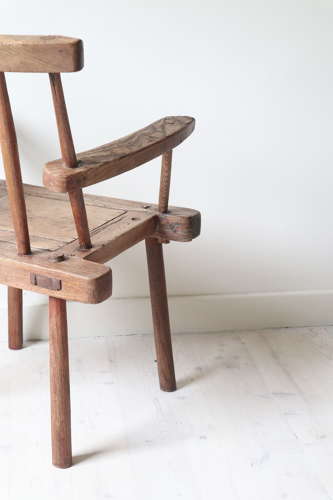 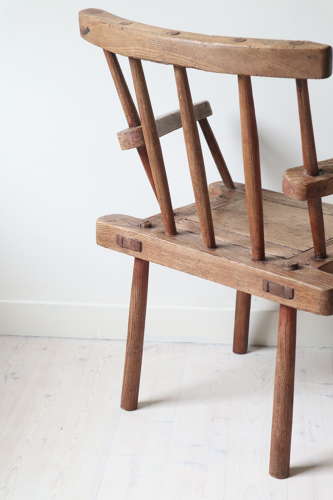 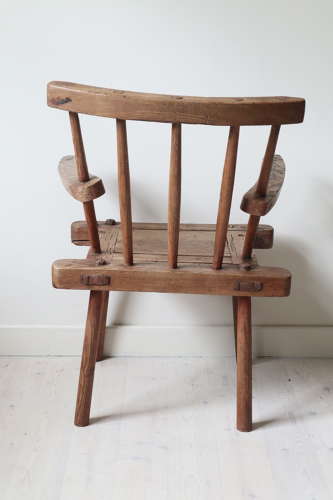 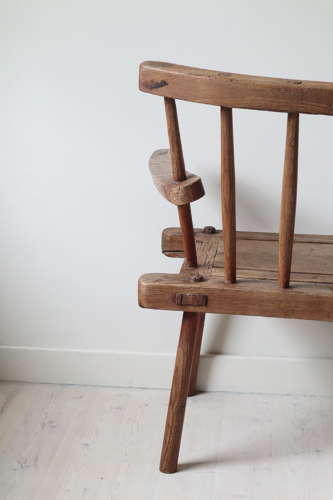 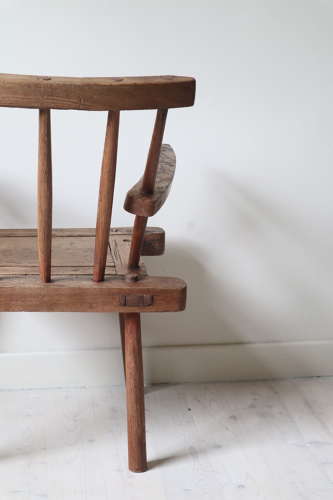 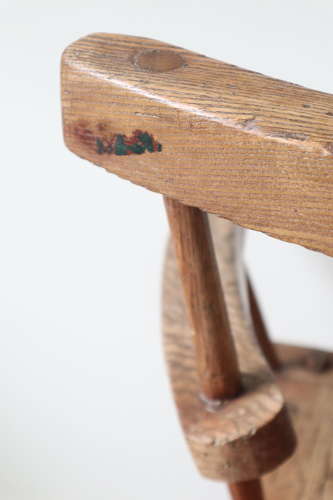 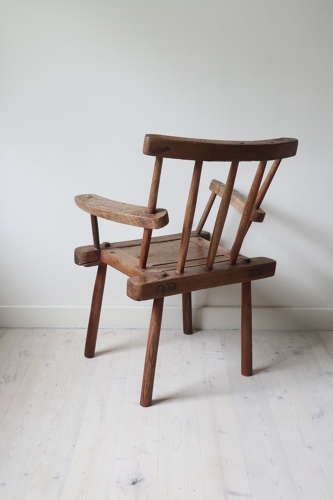 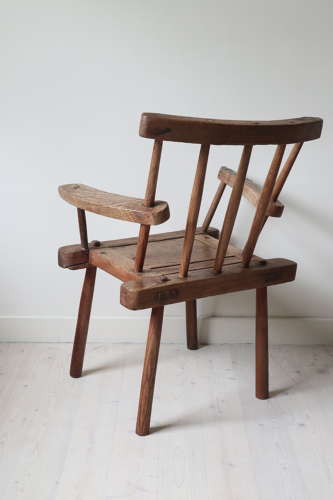 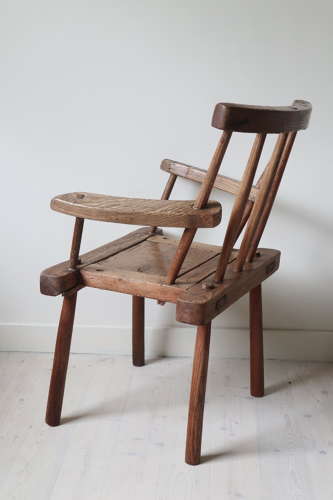 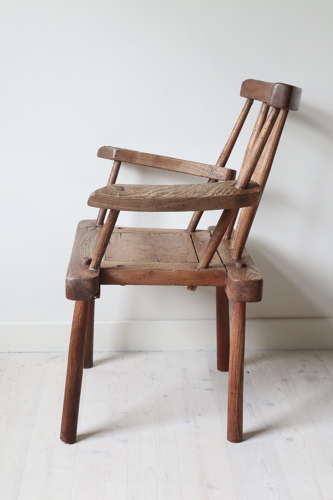 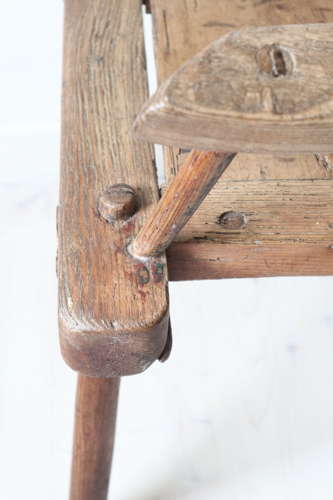 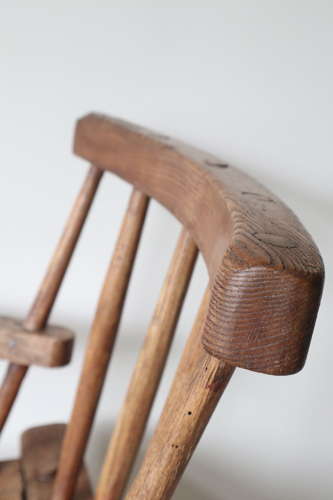 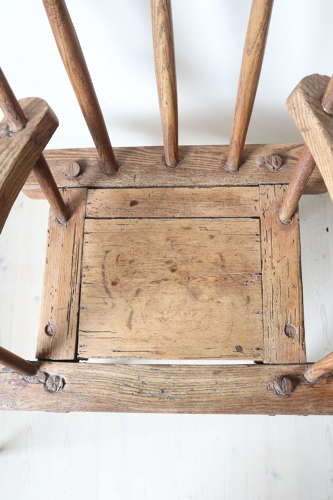 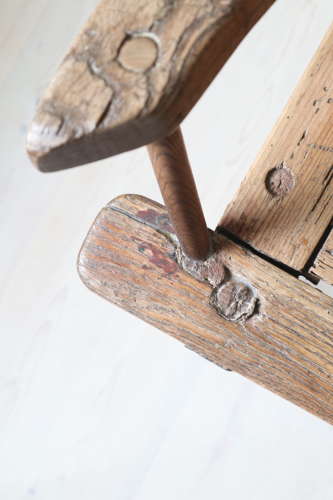 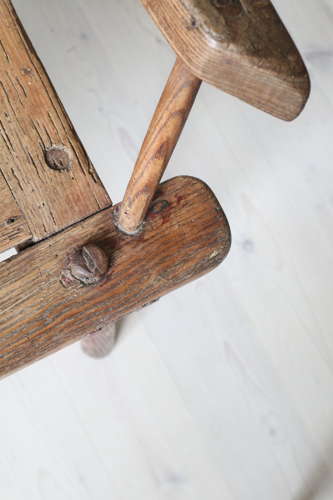 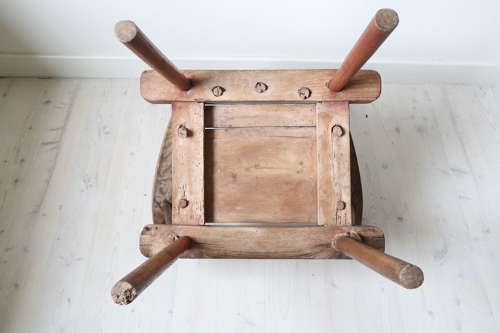 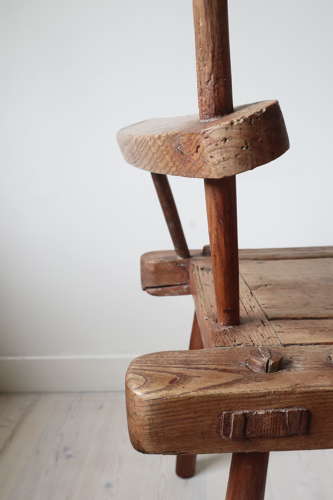 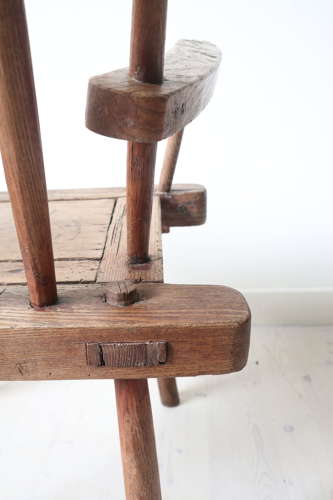 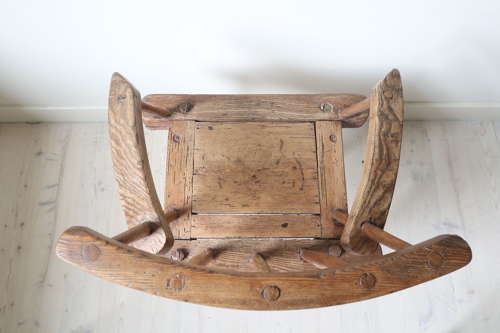 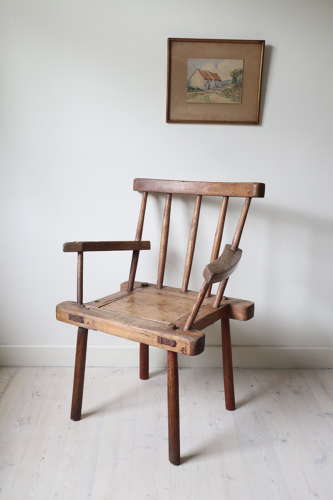 For sale is a very charismatic Irish Hedge chair from County Antrim, Northern Ireland likely from the second half of the 19th Century.

- This Northern Irish hedge chair* is one with design elements including both a characteristic composite seat construction and inter-locked arms connected to the rear corner spindles similar to the design of Irish 'Gibson' chairs**
- The backrest/rail is curved with the 5 spindles through tenoned and wedged above
- Predominantly made of Ash with a thin pine board seat and remnant paint.
- The seat being comprised of four thick pieces of wood, joined by mortise and tenon wedged joints and a thin pine plank seat board
- The turned ash legs and spindles are all through wedged into the thickest part of the seat and slightly splayed
- This little hedge chair has been of value to owner(s) and lived a life of considerable utility repair/maintenance and has been painted at least twice and then stripped.
- The chair has had replacement front arm spindles which were repositioned (shown in the images of the base of the chair) which has caused the asymmetric balance to the arms.  The owner having simply sawn off the previous two arm spindles which are still retained beneath, showing in the connecting seat rails and repositioned two new ones further forward.
- The chair has had historic woodworm, evidence of at least two layers of paint green over red as shown in the images and which is especially common on Irish vernacular country-made furniture
- It is identified** that similar to the more primitive Scottish crofter made chairs from Sutherland/Caithness and the west coast (The Northern Tradition of Scottish crofter made chairs***) the Northern Irish chairs of County Antrim and County Derry also overcame a lack of readily available large-dimension timber, capitalising on what was available in terms of material and their economic use to construct a functional and utilitarian vernacular chair.  It is also recognised that maritime links between the north of Scotland and the port of Derry may have influenced similarities in design

The watercolour of an Irish cottage is not included in the sale and is for context / scale only.